By: Will Chipperton – Saturday Captain

The hosts just about managed to scrape a side together for this friendly fixture, with 2 of their 10 men, Ben Alport and Lucas Metaxas set for their Park Hill debuts. The former, visiting fellow Northerner Rob Carter, enjoyed his host’s generous hospitality and assuaged the nerves of not having played for years by piling into lasagne and a few beers the night before. The latter, one of 3 pre-arranged late arrivals, excelled in last week’s Park Hill vs AFC Ewell CC bonanza and looked to continue his transformation from midfield playmaker into a military medium pace bowler.

The visiting captain, despite initially winning the toss and electing to bat, kindly agreed to field, seeing as we only had 6 players at the scheduled start time. Forget black trainers – elder statesman of the side, Prem, decided to add to the farcical nature of Hill’s preparation by sporting a fetching pair of blue chinos as he padded up. After finally getting his way following weeks of protestation, he was promoted to No.3 and special praise must be reserved for Aarsh, as Prem made him perform the longest throw-downs session ever as Bhupesh and Ben took the attack to a youthful Sutton side.

Whatever Rob plied Ben with the previous evening clearly had the desired effect, as he produced drive after sumptuous drive on his way to a rapid 50 – clearly practice is overrated as he made batting look easy after a spell of years away from the game! Ably supported by Bhups and the other end, Ben was eventually stumped on 98 after propelling the hosts to over 150 runs in the first half of the innings. A fine knock and we would appreciate it if Rob extends a few more ‘B & B’ invitations to him next season!

His departure brought Prem (AKA Chino Best) to the crease and he wasted little time in attacking the bowling and continuing the fast pace of the innings. Bhups was trapped on 69 and this brought Aarsh to the crease, the latter was no doubt exhausted by feeding Prem throw downs for 25 overs and soon departed for 6. The captain joined Prem at the crease and Hill continued to keep things ticking over. After Prem was bowled on 35, Mark Goldsmith (who had ‘only popped out for half an hour’) found himself batting at 6 and looked in great touch before being the first of a couple of run-outs in short succession, with Metaxas also suffering the same fate shortly afterwards. This left Rob with the inevitable task of coming in to face the final 3 deliveries, but much to the delight of the hosts, his immaculately placed French cut got him off the mark for the club at the 3rd attempt, removing the possibility of equaling Nacmanson’s unwanted 5 game quack streak! 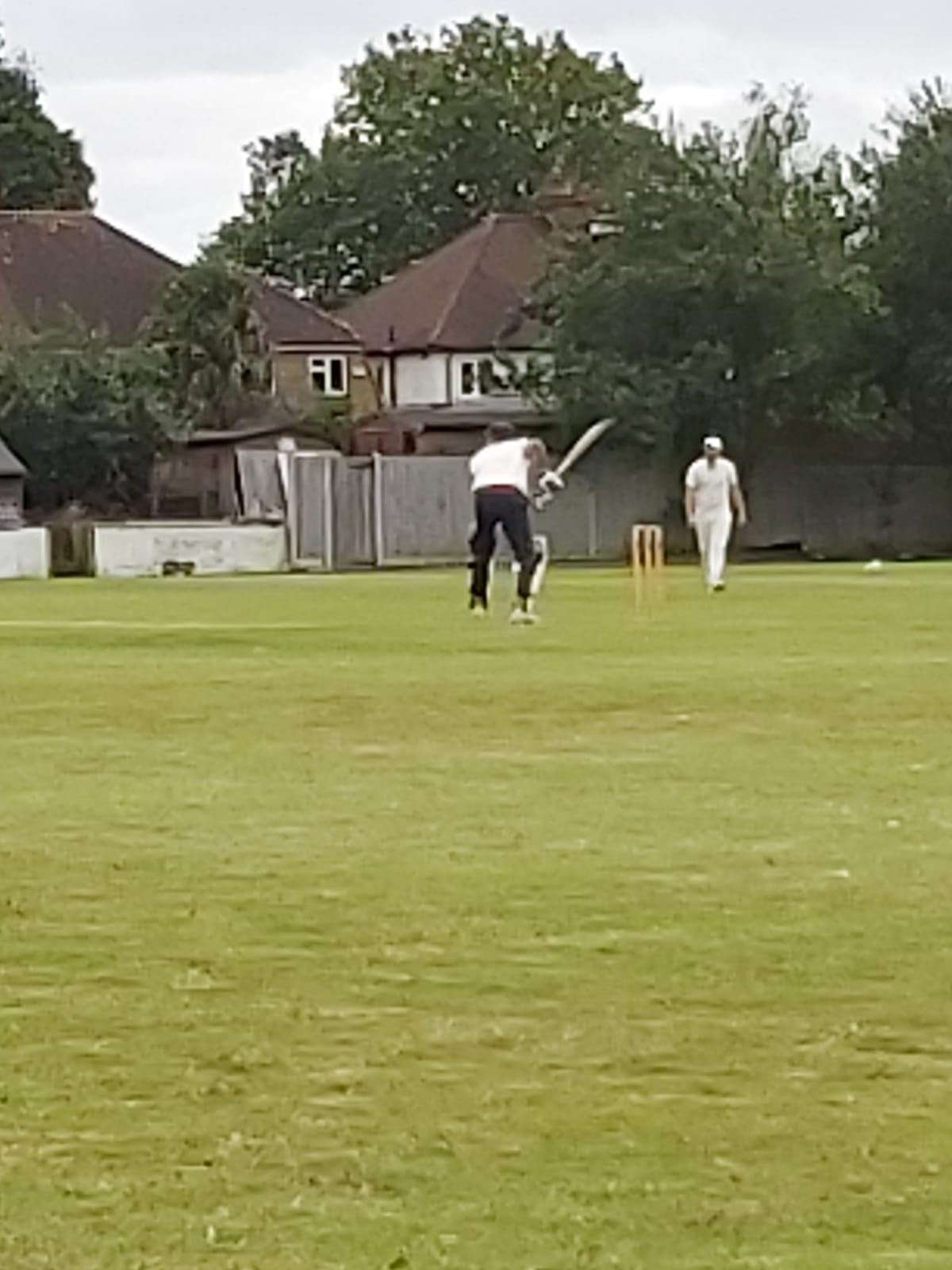 With plenty of runs on the board and in excess of 6 an over required, it only seemed fair that Nacmanson got the visitors off to a flying start and he duly obliged… In all fairness, he was unlucky with his spell and did see the only two examples of poor fielding in our innings culminate in two dropped catches off his bowling. Fresh from claiming his 100th victim last weekend, Smith continued his good form with the ball and claimed a wicket after Chipperton had performed two near-identical run outs for the hosts’ first two scalps.

Elliot, opting for a seam-up approach, quickly claimed 2 victims after a sprawling catch from Rob and a sharp catch from Goldsmith. Meanwhile, Rob bowled an impressive spell and picked up an LBW, before Ransom returned the favour and caught their opener off his bowling. With a top-order batsman retiring hurt, the final two wickets were claimed by the debuting Metaxas Rattlesnake, whose velvety-smooth action matched his suede trainers. The first dismissal was caught behind and the very next ball was an absolute jaffa that clipped the top of off stump.

We eagerly await his next spell and it remains to be seen whether he can claim a hat-trick! Another enjoyable outing in this bizarre season resulted in another Saturday victory, and there were plenty of talking points to relive over a few well-earned jugs. 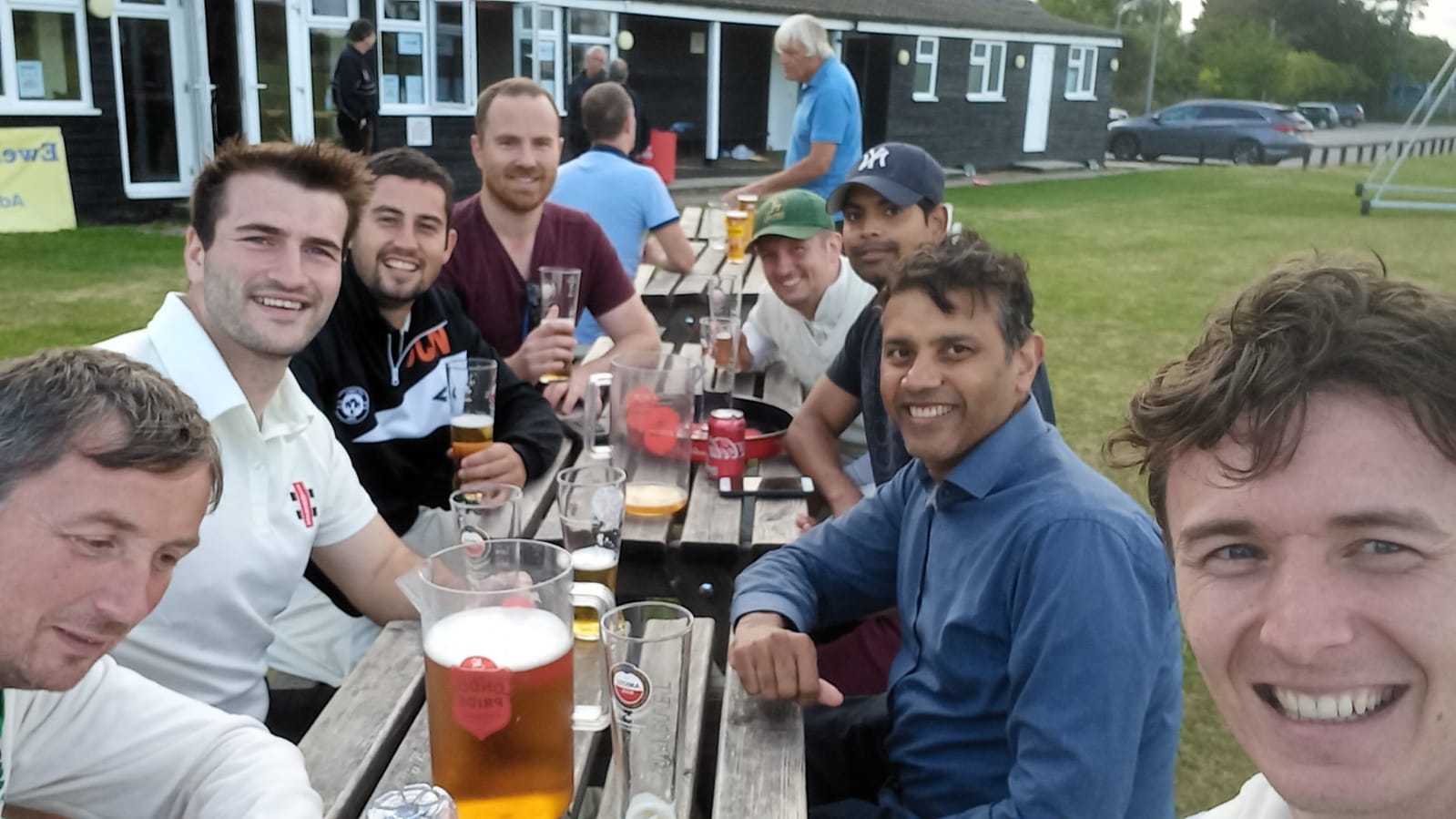 Fielder of the day: Mark Goldsmith

View all posts by ChrisKarunanithi