Hill Cash In For First Victory Of Season

By: Will Chipperton – Saturday Captain

The captain enjoyed another interesting week off the field in the build up to this weekend’s fixture.

Task one​: secure a venue. The chairman succeeded in sorting this.
Task two​: find an opposition. This was a bit of a curve ball and led to scramble to find an opponent on Thursday afternoon, after learning we had a pitch but no opposition.

Ironically, numbers looked relatively healthy by midweek despite the lack of a confirmed venue and opposition, but thankfully we found a lifeline in the form of Old Barclays CC. It didn’t take long for Hill’s resident chief scout (Chris Karunanithi) to alert the WhatsApp group to their lack of presence on Play-Cricket. This, coupled with their claim that they are “weak medium, more on the weaker side lol”, meant we could expect the unexpected on the day.

The opposition made the 16 mile trip over to East Molesey (our home for the afternoon) for the pre-negotiated 35 over game. Their captain apologised profusely after the majority of his side were running late courtesy of celebrating Eid the night before. In the end, the game did get started at around 13:45 and Hill (following a rare toss victory) elected to bat first.

Stupples looked to continue his fine form at the top of the order and was joined by Bhups, as Hill sought to build a commanding platform. Contrary to the presence of several black trainers in the outfield, the visitors’ opening bowlers persisted with a niggling line and length and could have made an immediate breakthrough, but Bhups was dropped by the keeper on 0. Both batsmen had to remain patient and wait for the bad balls, whilst the ubiquitous, steady stream of extras helped them to keep the score ticking over.

The openers did the hard work and Hill found themselves 84 for 1 from 18 at drinks. Bhups fell just short of his 50, but with 9 wickets in hand the ‘hosts’ were confident of kicking on for the final 17 overs, with 9 wickets to play with. However, to quote D.Ransom: “this is Park Hill…” 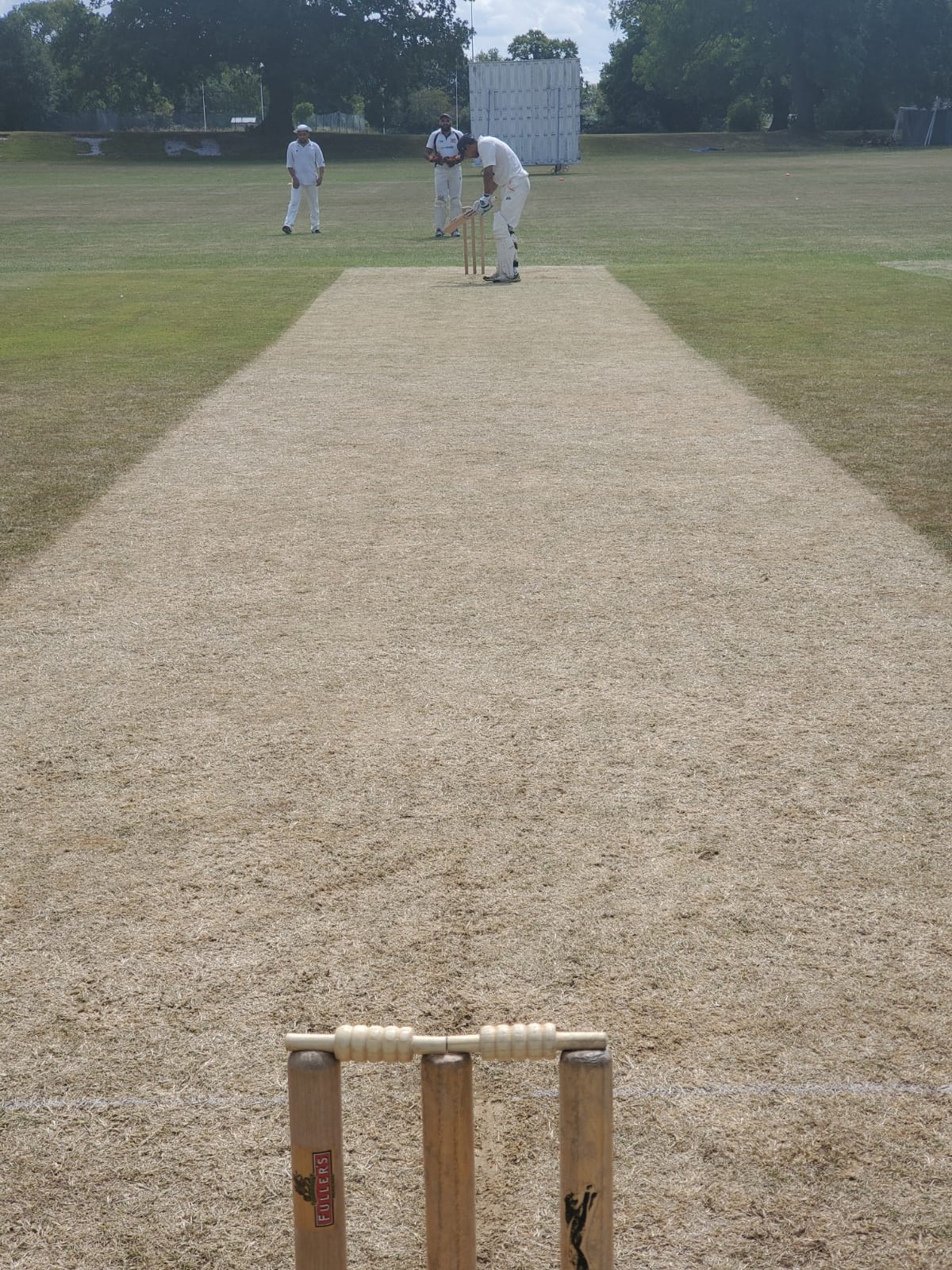 The customary collapse meant Hill slipped from 78 for 1 to 108 for 5, with Stupples departing for 37 and Aarsh, Mackay and the captain all falling cheaply. In the end, we managed to claw our way to a potentially defendable 150, with Elliot the only other batsman to reach double figures. Note to self: never purchase any duck related produce for a cricket tea – terrible omen.

We opened up with a combination of Walter White aka Daf (see below) and Barry – with the latter in hot pursuit of 100 wickets for the club. With Stupples donning the gloves, the captain stationed himself at long-on and this move paid immediate dividends. In Barry’s first over, their opener launched a missile that he just about held onto, narrowly evading the boundary in the subsequent tumble. Dafydd, who was getting some assistance from the lively pitch, claimed our second wicket after Bhups snaffled the catch at gully.

The opening pair bowled well in tandem and restricted the visitors to 51 from the opening 14 overs, and Barry claimed a second victim to leave them 3 down as his spell neared an end. The evergreen Prem claimed a couple of wickets in quick succession, bowling one batsman through the gate and claiming the other after Elliot made up the ground to cling onto a looping catch. Elliot and Stupples combined for two carbon copy stumpings as the visitors looked to kick on with the run chase, whilst Elliot got one through the gate to leave the score delicately poised at 93 for 8.

With 60 needed from the final 10 overs, the game entered a crucial period in which the result could have gone either way; the opponent’s captain was batting well and this set up a tense finale with 30 needed from the final four overs. Special credit is reserved for two individuals at this stage who made telling contributions. The first of these was Aarsh who, despite limping from the first over, performed a nonchalant pickup and underarm throw to claim a vital run out. The second hero was Rob, who demonstrated great determination to bounce back from being hit back over his head for a mighty six in the previous over to dismiss their captain and claim his first wicket for the club, cementing the win in the process!

Considering the uncertainty surrounding the venue and opposition during the week, this ended up being an enthralling and well-contested game that was conducted in the right manner throughout. Spirits were high having won the game with the opposition requiring 18 from the final 11 deliveries prior to the final wicket. To celebrate, Daf extracted a number of questionable looking vestibules from his cool box and began dispensing his take on ‘Punk IPA’, let’s hope he has enough in stock to bring some along to next week’s Club Day T20 Test Match!

Fielder of the day: Dave Stupples

View all posts by ChrisKarunanithi